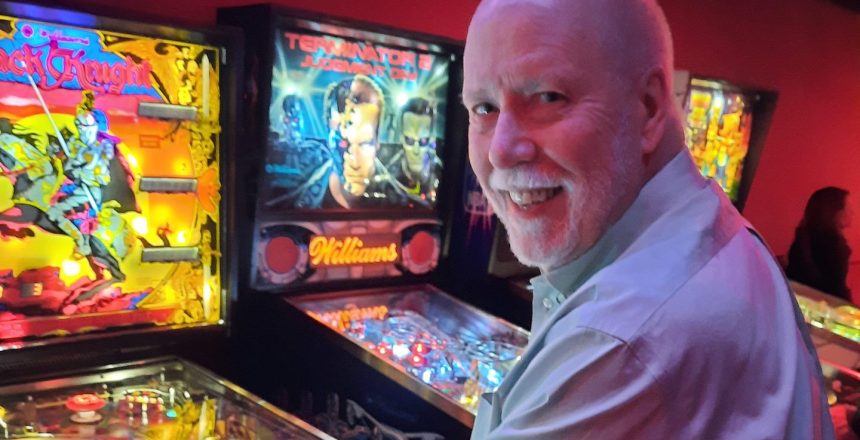 A long-haired student activist (easily recognized by his distinctive olive drab British Army greatcoat and black bowler hat) is walking home a half block from his apartment — when, just as a police car approaches — a newspaper falls from his pocket.

He is asked to stop, as two officers exit their vehicle; one officer retrieves the newspaper while the other begins questioning the activist.

“There’s nothing in this paper,” reports the first officer while the second officer asks, “What have you got in your pockets?” reaching into the activist’s coat pocket and finding a 35mm film container half-full of grass.

The officers cuff the activist, placing him in the back seat of their cruiser…

As they approach the precinct station, the inquiring officer says that the search they did wasn’t legal, “so the best thing to come out of this is we get another nickel of grass off the street.”

After being charged with possession of less than a quarter ounce of marijuana, the activist was loaded into a transport vehicle with a caged police dog that barked and snarled all the way downtown. His overnight accommodation was a holding cell with a cold iron bed.

Awakened in the early morning to be photographed and printed, the resulting mugshot was of a bleary-eyed perp. At his court appearance, the activist was released on his own recognizance. He later hired a lawyer and the case was dismissed because of an illegal search.

That activist was me.

Here in Massachusetts, we are fortunate in that the electorate saw fit to legalize the adult-use of cannabis. But, no one anywhere should be subjected to police interrogation or be forced to spend a single day or night behind bars because of it.

There are many across the country who still languish behind bars for years due to their use of this benign plant. That’s why it is so important to continue to support organizations like NORML, the Marijuana Policy Project, and the Last Prisoner Project. With your support, we can free the plant and all who use it.

Will Luzier is an attorney who was the Campaign Manager for the ‘Yes on 4’ marijuana legalization campaign. He is currently a Cannabis Commerce Consultant.

At Stem, we’re all about living that cannalife, and introducing it to others through education. Learn the ins and outs of all the different types of cannabis, ways to use it, and more.

At Stem, we’re all about living that cannalife, and introducing it to others through education. Learn the ins and outs of all the different types of cannabis, ways to use it, and more.

Sorry, you aren't allowed to view this website. Please come back another time.

By entering this website, you are verifying that are over 21 years of age.